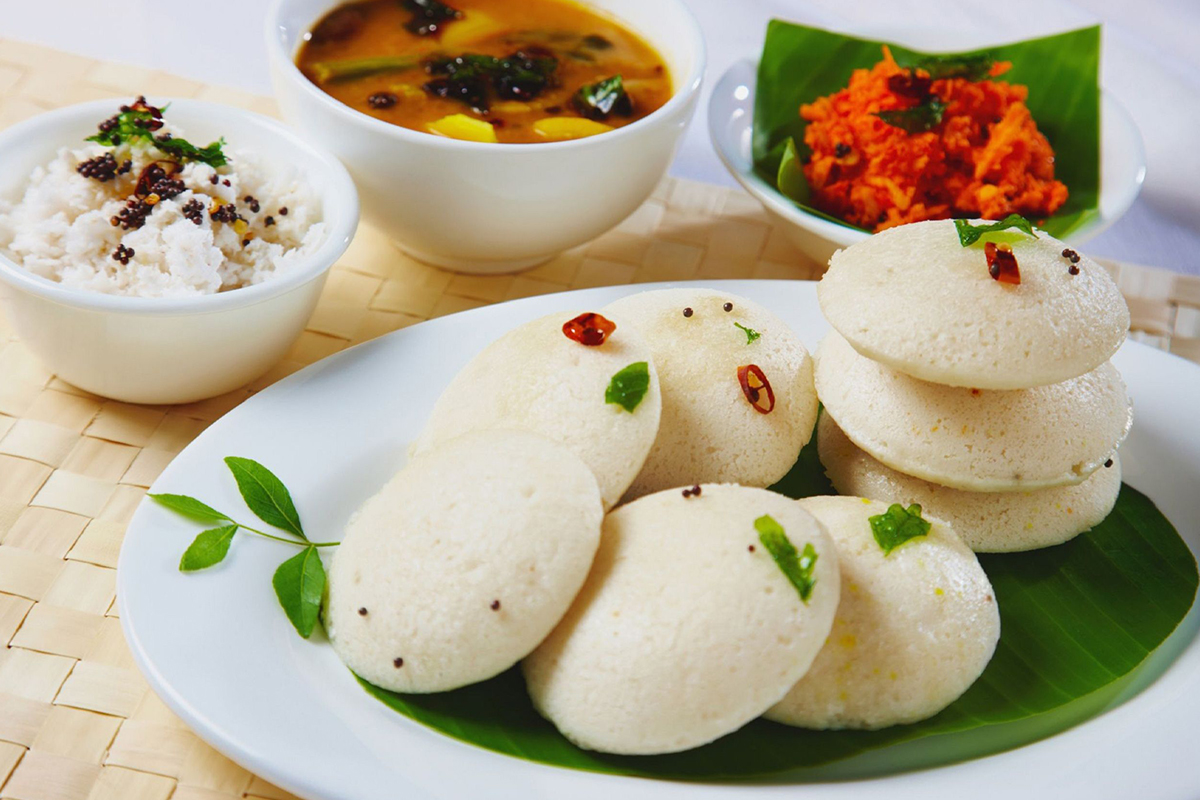 India has a rich heritage of food. It is a land of taste. If you haven’t tried authentic South Indian delicacies, then you haven’t tasted real Indian food!

Let us share a personal story. Shailaja is a great fan of South Indian food. When we came to Germany in 2003, it was very difficult, rather impossible, to find South Indian food in any restaurant. I remember there was one restaurant near Nollendorf platz where a quaint maternal lady used to come sometimes during the week and offer South Indian food. That was it. Even enthusiastic cooks need to treat themselves to restaurant food from time to time. That was dearly missed here in Berlin.

So, the only option was to eat at some friends’ place or cook these delicacies for ourselves. Blessed with amazing skills and gifted hands, Shailaja had to develop the recipes and cook the delicious food herself.

When we thought of Swadishta and its menu, along with Chats, South Indian food naturally earned the top spot in our list. Home made chutneys, chutney pudi, sambar powder and masala, the daily routine of soaking the lentils and rice to make fresh batter – this wide range of ingredients and activities is the key to the allure of South Indian special dishes at Swadishta.

To give you more insights about South Indian cuisine, we welcome you to the land of coconuts and spices. Let’s lay out a fresh new banana leaf for you as you experience the authentic taste of delicious Dosas, inimitable Idlis & Vadas, savoury Sambar, utterly tasty Uttapams, soupy Rasam and the sweet pudding Payasam.

South Indian cooking is known the world over for its ample use of coconuts. It is the only region in India which prefers to use coconut oil in cooking over any other variant, such as mustard or sunflower. Historically, coconut is a native fruit of southern India and it only earned a worldwide reputation after being spread to Europe, Persia and the Arab nations.

The individual culinary tradition of these five states have distinct features that are unique to each. To begin with, however, they do have some elements in common too.

Rice is considered the staple food by all; the use of coconuts and tamarind is widespread too. Consumption of lentils, spices, fresh green chillies and dried red chillies are common throughout the region too. Common fruits and veggies popular throughout south India include plantain, jackfruit, snake gourd, garlic and ginger. Curd is often brought into the picture in the form of pachadi or raita, and even consumed in the form of yoghurt rice or a sweet dessert.

The cuisine of Andhra Pradesh and Telengana is considered to be the spiciest cuisine in India.  The dishes are tangy and spicy at the same time, thanks to generous inclusions of tamarind and chillies. Boasting a culinary tradition which can be considered a hybrid of Hindu and Muslim styles, this region offers a wide range of mouthwatering vegetarian treats. The cuisine of Hyderabad is unique in its own right thanks to the Nizami influence, which makes it somewhat similar to Nawabi and Lucknowi cuisine. Apart from the world-famous Hyderabadi Biryani, the city is famous for Baghaar-e-Baingan (a dish consisting of eggplants) and Achaari Sabzi (a tangy vegetable preparation infused with pickles).

Mildest in terms of spiciness, the tale of the delectable dishes of Karnataka begins in the streets of the temple town Udupi, which many consider to be the birthplace of the world-renowned Idli, Vada and Masala Dosa. The signature trait of Karnataka cuisine is their affinity for using jaggery and palm sugar. Considered to be one of the oldest surviving culinary cultures of India, the gastronomic history of Karnataka can be traced back to the iron age. However, it has since then borrowed many traditions from its neighbouring southern states as well as Maharashtra. The cuisine of Karnataka is famous for its desserts too, such as Belagavi Kunda, Mysore Pak, Dharwad Pedha, Pheni, and Chiroti.

The cuisine of Kerala is marked by the unmistakeable presence of coconuts (its prime export), whether in the form of shaving, coconut oil or coconut milk. The allure of the spices of Kerala inspired Europeans to discover a sea-route to India. Thus, it is of little surprise that dishes from Kerala have the mermerising aroma of its world-famous spices. The gargantuan feast Sadhya, served to guests and devotees during the Onam festival of Kerala, consists of 24 to 28 dishes (at times, the number can go up to 64 and counting). Included in the Sadhya are plain boiled rice and a range of Kootan (side dishes) that include curries such as Parippu (dal), Sambar, Rasam and preparations such as Avial (consisting of 13 vegetables including coconut), Thoran (a dry vegetable dish), Koottukari (a hot and sweet dish that often includes banana) as well as favourites such as papadam and pickles.

In Tamil Nadu, the taste of Culture is as pronounced as the delectable dishes this region has to offer. Indeed, the traditional serving customs of Tamil Nadu cuisine reflect the value this region places on the gastronomic culture established in ancient times. Banana leaf is still used extensively while serving the classic Dosa, as well as any other typical lunch or dinner. Meals are classically accompanied by pickles and appalams (papad). Side dishes are replenished multiple times during the course of a meal. Paan is served at the end since it is known to aid digestion. The love for beverages such as coffee and tea mean that they are served in all kinds of Tamil restaurants.

Any write-up on Tamil culinary culture would be incomplete without a note on the Chettinad cooking traditions, marked by complex, well-balanced flavours with ample use of freshly ground spices such as cumin, fenugreek, fennel, clove, bay leaf, turmeric and tamarind. The cuisine of the Chettiar community of Tamil Nadu is known among foodies around the world for its vibrant variety. Apart from favourites such as Dosa, Idli, Vadai, Sambar, Rasam, popular Chettinad dishes include Uthappam (thicker Dosa with toppings), Kootu (lentil and vegetable stew), Idiyappam (rice noodles) poriyal (fried or sauteed veggie preparation) among others.

So what are you waiting for? Prepare to taste the best selections from the delicious world of south Indian cuisine at Swadishta, the premier destination in Berlin for savouring pure and authentic Indian food.

Previous Next
Close
Test Caption
Test Description goes like this
×

Pincode field should not be empty!

You can find out more about which cookies we are using or switch them off in settings.

0
0
Your Cart
Your cart is emptyReturn to Shop

This website uses cookies so that we can provide you with the best user experience possible. Cookie information is stored in your browser and performs functions such as recognising you when you return to our website and helping our team to understand which sections of the website you find most interesting and useful.

Strictly Necessary Cookie should be enabled at all times so that we can save your preferences for cookie settings.

If you disable this cookie, we will not be able to save your preferences. This means that every time you visit this website you will need to enable or disable cookies again.